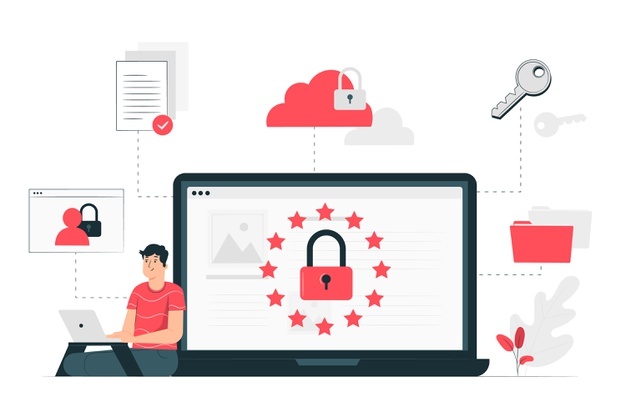 What is data protection: Generally, the word protection means the security given to something. For example, a house protects us from getting wet, when raining etc. In computers, the word protection is referred to protecting data from others, so, that others cannot get the information. In computers, information is stored in hard disks, floppy disks, CD-ROM disks, etc. i.e. any secondary storage device, permanently. We need to protect it from getting accessed or modified or deleted. There are two categories of data; they are private and public. Private data features your name, password, address, telephone number etc. Public data is made available to public, information on some specific fields, which includes science, technology, mathematics, etc. Not all information on these fields are not public data. They may have private data also. It depends on how data is organized to protect it from being accessed.

Normally, we store information or data in the form of files, in the secondary storage devices. The computer checks whether the data is in protected mode. If it is true, then computer will not provide data to the user. Each of the file information is stored, in File Allocation Table (FAT), in case of Microsoft family of operating systems. File Allocation Table, is table of rows and columns, with each row corresponds to one file. The columns are, of, name of the file, address offsets from and to where data is to be read, different file attributes. One way, and perhaps, the only way to give protection to the file in FAT, FAT16, FAT32 is by hiding it and making it read only. But, that was not enough, as a user, knowing the existence of file, can reach it directly, without any difficulty. Microsoft later released NTFS (New Technology File System), which greatly increased the security options.

With the advent of client-server technology, the computer system had revolutionary changes. NTFS introduced a concept called File and Folder level security, where in, one can set options, with user name, and passwords. The user with sufficient permissions can access the file. However, there are several o*ther issues. The user name and passwords are to be made secured. So, they introduced a concept, called encryption and decryption. The basic idea of encryption is to convert data from one form to another. For example, suppose the letter ‘A’, may become ‘Z’ after encryption. Decryption is the just opposite of encryption. i.e. ‘Z’ should become, ‘A’, after reversing that is, decryption.

The second security measure, apart from the encryption is, the firewall. A firewall is a program, which monitors the traffic. The traffic is nothing but, a group of files. It may be a network file or an ordinary file. A firewall prevents the certain files or data from entering into system. It checks data or properties of the file and allows or blocks the file, depending on the condition set. Say for example, suppose, if one can prevent the file abc.txt from entering into the system. Like wise, we can block or allow the messages or files, which are willing to enter into our computer.

The growth of technology has resulted in bringing high level security, in the computer system. However, a more advanced data security system need to be built, which will prevent, unauthorized access into the system, in the years to come.

How Can Companies Train Employees On Cybersecurity Through An LMS?